"We're a fake cartoon band who writes comedy songs. We're 100% super-duper serious about the subject matter of our songs. Yes, our balls really are the size of the earth's moon. Yes, we really do drink the tears of baby orphans. Yes, we really have sexual relations with zombies. No, seriously."

Your Favorite Martian (or YFM) is a virtual band created by Ray William Johnson. It is comprised of four members, Puff-Puff (Lead singer), Benatar (Guitarist), Axel (Drummer) and DeeJay (DJ). Together they write songs about all kinds of topics, ranging from toxic relationships to a girl that has exceptionally large breasts. During the years they were active, they were the #1 most subscribed music channel on YouTube and sold over 1.2 million songs on iTunes.

Unfortunately, the project was retired in late 2012 after a dispute between Ray and his network, Maker Studios, which lead to the cancellation of the album they had been working on for nearly a year. 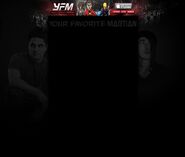 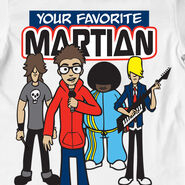