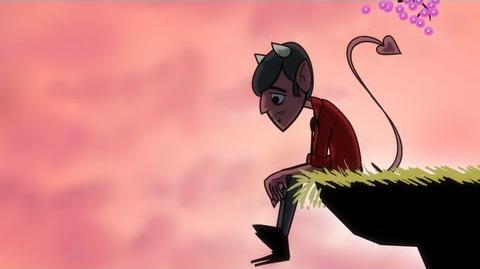 The video follows a male omen (son of Satan) and a female angel. The video begins with Benatar, dressed in what appears to be night's armor, singing and playing the piano in what appears to be a cloud castle (presumed to be heaven). While he does this i t cuts back to the Omen and the angel, the angel wave to the omen and he waves back, he is then seen locked outside the house, (it can be presumed that the angel is at a friends house, as Benatar says when this happens "...and when we go out with your friend you act like you don't want me around"). Then the angel finally comes back and she and the omen hug and appear happy again, after that the video.continues to shows the angel doing both acts of romance towards the omen (such as taking care of the omen when he's sick, kissing him, and comforting him) and at times being quite inconsiderate to him (such as taking his umbrella, leaving him the pouring rain to catch a cold, ignoring him and instead talking on her cell phone while he's trying to talk to her, and ignoring his flower that he picked for her). After a while the scene shifts from the castle to very hot (as implied by the heat waves coming off of the rocks) rocky, layer (presumed to be hell). It shows the rest of the band playing their instruments then the scene cuts to Puff sitting in the devil's chair (implying he rules this rocky layer), Puff starts angrily rapping and the mood of the song changes from peaceful and melancholy to heavy and angry and Puff describes how the omen both hates and loves the angel and how he is quite bi-polar. After finishing his rap the scene shifts back to Benatar in the castle Benatar continues to play his piano and sing along to the significantly heavier music, then after singing "everytime you make me cry, I love you a little bit more" three times the scene shifts back to the rocky layer where Benatar (now dressed in his normal outfit) plays a guitar solo until the song ends and the Benatar in the castle plays and sings the outro. The music stops and it shows the angel and the omen again holding hands, however, the angel walks away after a few seconds leaving the omen alone, the omen then cries again.

Retrieved from "https://yourfavoritemartianrwj.fandom.com/wiki/COMPLICATED?oldid=6796"
Community content is available under CC-BY-SA unless otherwise noted.